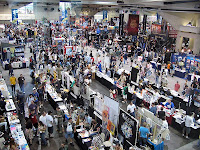 Makes sense to me. I'm a family man myself. Although I do go to a few cons, they were all either within an hour's drive or part of a larger family vacation. I hit the show with my sons and my wife hit the pool or local sights. And of course I don't work in the comic business so the shows didn't seem like more work.

so basicly you're saying people who go to cons are losers..?
LOL!
just kidding. i do more art shows than conventions, but i'm getting back into the con game. clearly, the folks you're talking about are on a different level with it (i don't know if i'm ever going to Europe for a con appearance...).

that said, combining travel with cons is a tax write-off.

my wife is a big traveler, so i anticipate doing it more now that i'm married. i'm more of a homebody.

Well I still hope to see you at Baltimore this year. Wouldn't be the same without you. And we gotta figure out when to do the Comic Creator Cookout again this year with Brian and whoever else!

Craig, we did the family split thing in Philly one year. Wifey did all the historical tours while I laid it down at the con, we hung out in the evening and had dinner, then when the kids went to bed I hung out till 3am or so. Nice set up, but I always wanted to run outta' the con and hang out.

Samax, nah! People at cons have been, in my experience, the opposite! Fans were always cool, and seriously normal. Not at all what people painted them out to be. I'm not saying there wasn't the occasional odd ball, but you see that anywhere you know? ;)

Bill, I want to do another cook out asap! Maybe after my trip? Late July, or August? Might be too hot tho, so maybe later? Up to you.

This is way better than my reason: I'M FUCKIN' PISS POOR!

First off, that's cool of you to just come out and state your view, regardless of if it is received well or not. It is out there and no one can question your motives. That cookout idea is pretty damn cool honestly. I wish I lived near a convention that organized something like that but tis not the case, oh well, maybe some other time.

But I don't blame you at all for enjoying your family, because well, they are your family. They sacrifice things for you and you do the same. Plain and simple.

Thanks dude! Do you live anywhere near Central PA? We're going to do another cookout sometime this summer. I think you may have mentioned where you live, but for the life of me I can't recall it.

Doesn't help I've only slept 6 hours the last 2 days trying to finish ORIGINS #4 - which is gonna be crazy awesome and worth all this suffering...almost ;)