Rick Remender just posted this fantastic page Tony Moore finished for Fear Agent #27. It was a special treat for me as it was a page I ghosted some breakdowns for and I hadn't seen the final for yet. I get a huge kick out of seeing what Tony (or anyone else I've ghosted for) does to the page. There always something to surprise me when I see the final art. Tony is especially great at bringing texture and depth to a page. Anyway, as a special treat I figured I'd post the two as a little behind the scenes look at the series. I love this kind of shop stuff, and I'm sure you all do to ;)

Have you been reading my webcomic, Hyseria? If not, you should be!

New pages every Monday, Wednesday, and Friday at www.thinktankcomics.com/

When not working on G.I. JOE Origins, I've been picking away at the other book in my life - Fear Agent, with Rick Remender and Tony Moore. Can't show you too much, since it's so early in the game, but I can tell you it's gonna knock your socks off. Rick has gone all out like never before with this book, and I'm trying to follow suit.

Anyway, enjoy a sneak peek...cause you may not see the actual book for some time ;)

Chimera - Who is that bad guy?

Mike
Posted by Mike Hawthorne at 6:34 AM 2 comments:

Issue 1 hit stands today, and I'd love to hear what you think. Unless you didn't like it, in which case you shouldn't tell me. Basically, I only want to hear you liked it. I'm a dictator that way ;)

Since it's on stands I can finally show more art! This is Chimera, the new bad guy for the series.

PS - Apparently some shops/cities didn't get their shipment or got half shipments. I think the demand was greater then expected. Anyway, hope it gets resolved soon...
Posted by Mike Hawthorne at 1:51 PM 2 comments:

Ok, so IDW released a preview of G.I. JOE: Origins #1. There seems to be debate over it because it's unclear who drew what.

This preview was drawn by Tom Feister, except for page four which I drew. The plan was for me to draw the second half of this issue, and the rest of the series - which is four more issues after this one. Five issues total.

Deadline issues sorta dictated that I had to draw a few pages earlier in the first half to make sure we shipped the book on time - which is why there is an odd page of mine in Feister's mix.

Here is the page in question:

Tom essentially established the style of the book, and so we decided to try and keep it similar without me trying to copy him. As the series goes on I try and slowly inject more of my approach into the art. I'm proud of how it's coming out, and I think you folks will enjoy it.

There also seems to be some mystery as to who I am. I don't do a very good job of selling who I am, since I think it's silly, but here goes...

I'm Mike Hawthorne. I've been making comics for about ten years. I've worked with every major comic publisher in America including Marvel Comics, Vertigo/DC Comics, Dark Horse, Image, Oni Press, and now IDW. My work has also seen print in Spain, France, Germany, Australia, and a bunch of other places like Mars. Maybe not Mars.

Jenifer ( I call her "Jennie". We're pals) Garner and Huge (I call him "Huggie". Again, pals.) Jackman are my biggest fans.

In a former life i raced cars.

Oh, and I'm a super ninja badass. This is a fact, as proven in a triple blind (AKA - drunk) study by really scientific people I know from my block - like JO JO the ten speed guy, Jerry the aluminum can collector guy, and Rico with the limp.

So, hopefully this will clear things up for everyone. Hope you enjoy the book, which ships this week on Feb. 18th.

Last, but not least!


Mike
Posted by Mike Hawthorne at 12:01 AM No comments:

Wrapped up issue 2 of Origins over the weekend, and I'm really proud of how it's turning out. Lots of great character development by Larry, and tons of great moments like Scarlett kicking three men's asses at once! ;)

Links to the NYCC IDW G.I. JOE panel from this past weekend over at my forum. Feel free to discuss.

Best!
Mike
Posted by Mike Hawthorne at 11:41 AM No comments:

Second one of those mailers I mentioned below. 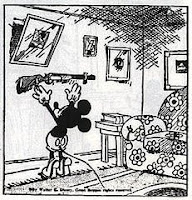 Back when One Man Gang was coming out through Oni I made four of these small mailers which I sent to retailers. Unfortunately, I had a change of heart with the publisher, so all the effort was for nothing. So, figured I'd share them now as a reminder to GO READ THE WEBCOMIC! ;)

Just a quick note to let you know I moved the forum over to Ning.com. I like all the possibilities for customizing on Ning, and am excited to really get started with it!

I look forward to hearing from all of you there!

best,
mike
Posted by Mike Hawthorne at 9:19 AM No comments:

Here's the final of this page.Unfortunately, I only had time to color half this comic. Had to jump into JOE really quickly and it cut this one off. IDW got a fine colorist to wrap it up, who did a good job of mimicing the style.

Mike
Posted by Mike Hawthorne at 6:27 AM No comments:

Another peak at the Star Trek comic I did. Should be in stores next month.

I'll also be putting some of the art up for sale on my site, mikehawthorneart.com, later this month. Stay tuned :)

best,
Mike
Posted by Mike Hawthorne at 6:00 AM 2 comments:

Remember the riddle from a few posts back? Well, the answer is...

Roadblock is named Heavy Duty now. Hama even talked about it in an interview apparently. 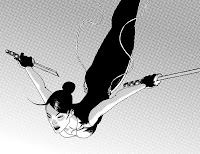 In addition to the Hysteria trades, I'd like to print up a new sketchbook. Digging through some art files and found these. A couple of concept pieces from a few years back that I did for a proposed film.

Mike
Posted by Mike Hawthorne at 6:00 AM 4 comments: