The Victories #8 available for pre-order!

Just wanted to draw your attention to a book you should all be reading: Mike Oeming's "The Victories".

Mike is an close friend, and he recently asked me to illustrated a back up story. I was very busy with Deadpool and Action Comics, but when Mike asks I make time! 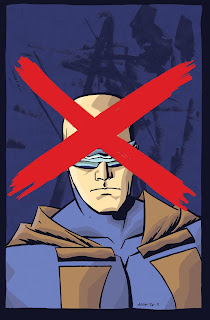 The Victories #8
Michael Avon Oeming (W/A/Cover), Mike Hawthorne (A), and Nick Filardi (C)
On sale Jan 1
FC, 32 pages
$3.99
Ongoing
The Advisors succeed in combining Champion DNA to turn themselves into the powerful Posthumans in an effort to dominate the world. Heroes and villains may stand in their way, but nothing will stop the Posthumans from taking their “rightful” place ruling the planet until the return of the Visitors. Featuring an exclusive backup story illustrated by Mike Hawthrone (Deadpool).
• By Eisner Award winner Michael Avon Oeming (cocreator of Powers).
• #FindtheVictories
• Ancient alien history and superheroes collide!

AND, here's a sneak peek at a page from the back up story. 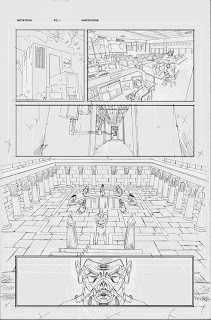 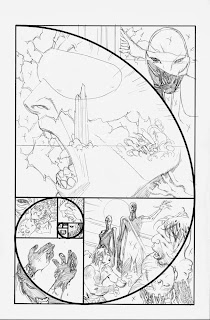 Mike inked my back up, Nick Filardi handled the colors, so the result is pretty fantastic!

Do yourself a favor and support this unique creator owned book. Ask your local comic shop to carry the book.  Mike is throwing everything he's got into this series, and it deserves a long life!

Tweet
Posted by Mike Hawthorne at 9:08 PM No comments:

Women, comics, and my experiences.

Due to cartoonist Tess Fowler's accusations towards writer Brian Wood, there has been a big discussion lately about how women are treated in the comics industry. I admit, I don't feel totally qualified to chime in since A. I don't go to conventions, and don't interact with many comic folk in person, B. I'm not a women, and C. I don't really know either person (other than their work) involved here and I have no idea of what happened.

However, I wanted to share my personal experiences mainly because the issue is being painted as an industry wide problem. I'm sure the problem is big, but I think painting the entire industry with a broad brush is unfair.

My very first editor ever was Dark Horses' esteemed Diana Schutz. She edited Sin City and Grendel, to name a few. Not only did she give me my first gig, but she kept the door open for me to return to Dark Horse over and over.

The very first editor to give me a shot at Vertigo was the legendary Karen Berger.  She started Vertigo at DC. Let that sink in.

One of two editors on the most important book of my career, St. Michael's Promise (unreleased), was Sarah Litt. She became the only editor on it, after Jon Vankin had to leave Vertigo, and she quite literally got me through this book when I wanted to drop it and take up drinking.

The first editor who offered me a DC Universe gig was Joan Hilty. I had to pass on it due to scheduling reasons, but we remained in touch and she was instrumental at Vertigo's graphic novel line when I was working on St. Mike's.

There is also my first French comic series ever, Oms En Serie. It's release was a big deal in France, and my boss there is Elsa Sztulcman. She guided me everyday through my first foray into the intimidating French market and helped make it a success.


My first editor at Marvel? You guessed it, a woman! Mackenzie Cadenhead gave me my first shot at cashing those checks with the Spiderman logo on them, and I'm eternally grateful to her for it.

If you look that over you'll see that these women are the roots of my entire career in comics! It's hard to imagine my career being as awesome as it is now without the guidance of these women. They were and are my bosses, but also they often became good friends. They are all tough, smart, and at one point in my career or another, my champions.

This is no surprise to me. My mother raised me alone without even so much as one dime or a minute of help from my dead beat dad. She got me through poverty, homelessness, and taught me how to be a man.

I guess my point is that there are some real life heroes in the comic industry, who just so happen to be women. So portraying the industry as a wall of  misogynists is not entirely accurate.

Now, people have called on men in comics to stick up for women when they see nastiness happening. I agree with that, and on one occasion I have. This was years ago, when I gave cons a shot for a year, and a fan was harassing a co-worker at a booth. When I stepped in this dude went ballistic, but luckily he eventually stormed off. Afterwards my friend told me that she gets guys hitting on her often at the booth, but she handles it... without them going postal.

I felt a little silly afterwards. I was all "Macho Man" ready to protect her, and she'd already been doing that on her own all day. It makes me think of a quote from Kurt Vonnegut where he discusses something he told his wife, "I told her one time, 'I worry about women." She said, "Don't. '"

In closing, to every woman out there who ever gave me a chance at my dream job.... THANK YOU! I know you haven't needed me to get where you are, but God knows I need YOU to get to where I am!

Keep up the good work.

PS - If you want actual advice on the topic, look no further than G. Willow Wilson. She was at Vertigo with her series AIR when I was there on the The Un-men. She's much smarter than I can hope to be, so go read her post on the subject!

There are now previews for Deadpool 21 online. You can see them here, in fact. How's that for service?

Also, for you process junkies, here are the pencils to compare to the inks. 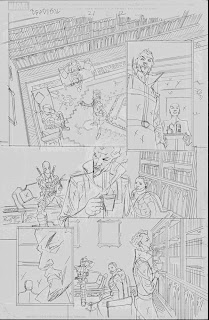 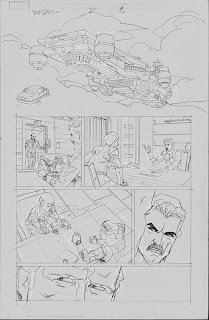 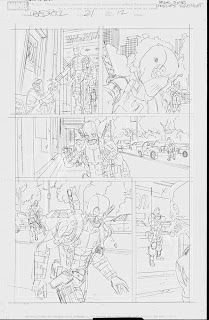 Now, go tell your local comic shop to order you some!


Tweet
Posted by Mike Hawthorne at 10:43 AM No comments: 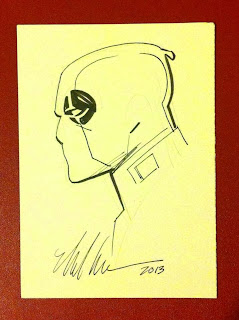 As you may have heard, it's soon time for my next arc on Deadpool to begin (which, you know, you should tell your local comic shop to pre-order for you). The Holiday season is also fast approaching. So, I thought I'd combine the two and make some magic happen!

Deadpool #22 ships January 8th, which is 66 days from now. I'm going to give out a sketch card a day till the day Deadpool 22 ships!

I'll be picking fans and followers from Twitter and this blog. I will also be dropping them in random places for people to find. Whatever strikes my fancy for that day.

So, sit back and enjoy!

PS - This is purely for fun, for me and all of you. I don't want anything from anyone. Please don't e-mail me asking how to better your chances of winning. Really, it's more than likely just make me grumpy and want to lessen your chances. THANKS!


Tweet
Posted by Mike Hawthorne at 5:19 PM No comments: