Conan: Road of Kings #4 is in stores today, so I'll be sharing pencils from that issue here on the blog. First up, one of two double page spreads from the issue. 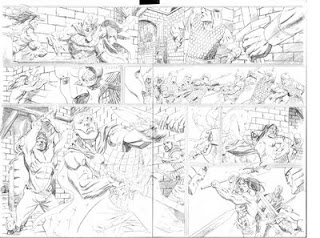 The kind folks at Comic Alliance featured my work on their site! I'm really flattered, and happy they like my work so much!

Check it out here.

Tweet
Posted by Mike Hawthorne at 9:25 PM No comments:

Dark Horse has released a preview for the next issue of Conan.

I've been getting some great commission requests lately, and this batch was no different.

One patron asked for a shot of his wife (who just so happens to be a Suicide Girls model) as X23. Very cool :-) 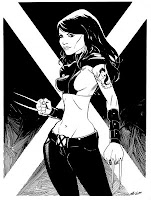 Here's another great request, Big Barda! Which, you know, is right up my alley ;-) 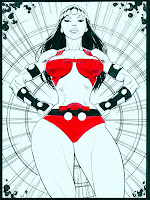 Hope you guys enjoy it.

I *think* I wrapped up the Roald Dahl piece for Comic Twart.

It's almost what I had envisioned, which means it will bug me in the long run and I'll end up going back into it to tweak the art.

Hope you all dig it.

I'm really excited by this week's Comic Twart theme, any book or story by Roald Dahl! I love his books, and have read many of them to my kids (currently reading "The Twits"). But the story I most remember growing up was "The Smoker" or "the Man from the South".

Only, I didn't KNOW it was a Dahl story when I first fell for it! I grew up watching tons of mystery and detective shows as a kid, and that included Alfred Hitchcock Presents. I don't recall most of the episodes I watched and re-watched as a kid, but one episode I could never forget was The 1985 version of "The Man from the South". (the story has been adapted to TV three times, and Tarantino apparently made a version, but one only one I've ever seen was the 85 version)

Before I give anything away, you should go read the original story written by Dahl.

I just love the suspense and drama of the story! This was just my kind of material! Hell, even now I'd REALLY LOVE to adapt this thing, and several other Dahl stories, into comic form! How sweet would that be?!

Anyway, the Comic Twart piece will have to do for now. I'll be posting this thing in bits and pieces till it's done. Here's the premilinary inks over rough pencils.

More work in progress for the Dahl piece. Added a scaled brick background on the ground to give the piece some space.

Tweet
Posted by Mike Hawthorne at 1:07 PM No comments:

Labels: Comic Twart, Roald Dahl, sketchbook, The Man from the South, The Smoker

What do you get for the Superhero who has everything (including his own supercomputer!)?

This is another great commission I got recently. Seriously, can't believe I get paid to have this much fun!

Hope you dig it!


Tweet
Posted by Mike Hawthorne at 8:15 AM No comments:

Here's another cool commission I did recently. It's to be a companion piece to the DOOM Patrol art I did a while back for Comic Twart. Same cool collector owns both pieces.

Hope you dig it.

Are you reading Raising Crazy?!

Hope you're all checking out my web strip, Raising Crazy 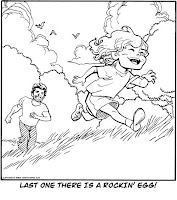 Been updating it every Monday, Wednesday and Friday.