Just in case this weekend is as all out crazy as I think it's going to be, I wanted to take a moment and wish you all a Merry Christmas. Hope you all have a great one, and get to spend time with family and friends.

Did this back when Tupac had died and everyone was coming out with album after album of his unreleased stuff. I showed this piece at a High School for at risk youth I used to teach at and some of the boys thought I was making fun of their idol and wanted to jump me. Good thing I have nerves of steel ;)

This is one of my favorites. I got the texture by pouring salt over the still wet colored inks I was using. 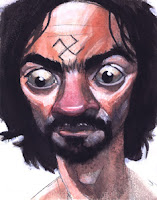 This was stolen and used on the cover of a limited release Redman mix CD thing. I even saw a picture of Redman holding one he had signed. They altered it a little and made it look intensely stupid.

When I was still doing advertising work for the Sixers I always had to draw a kindler, gentler Iverson. They never wanted tatoos on him or anything. So, I ended up doing one for my self with the tats to put in my portfolio.

That's all for now.

mike
Posted by Mike Hawthorne at 5:30 AM 3 comments:

I've been working on Hysteria and thinking about when I got started in comics, around 1999. Before I was in comics full time, I did mostly illustration work for magazines and advertising. Thought I'd share some of my old portfolio pieces from that. These are all date from 1999 to about 2001 or so.

McCain. This was from when I was trying to get into political illustration. Eventually got myself an offer to do a political cartoon about PA politics for a Philly paper, but the pay was poor and I was too busy to take on more work for less pay

Paint this caricature of Gore after his switcheroo performances during the presidential debates. 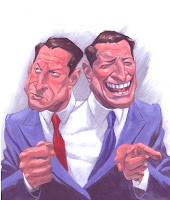 Did this after a story years ago about how fat our kids were getting here in the US. This was promptly stolen and used by a news paper in Arizona. YAY, Arizona! 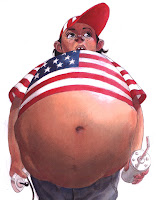 Did this around the time I was trying to get into political satirical / editorial illustrations.

Years ago I was doing advertising art for this celebrity basketball game. AND1 had this team they would send out to play at events like this. Kinda like the Harlem Globetrotters only they actually played to win and had almost no charm. Two of the guys slammed at once during the game, and broke the glass. Crazy ass thing to see in real life. Anyway, this was going to the the cover to a CD for the event, but it never worked out. 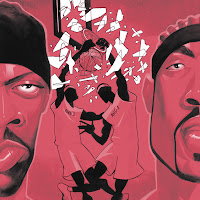 That's it for now. I'll post more later this week.

Mike
Posted by Mike Hawthorne at 8:45 AM 2 comments:

So, the first arc of the Un-men is done and I hope you all enjoyed it. We're now in the middle of a new 3 issue arc starting with issue 7. HOWEVER, for issue six John wrote up a great little one issue story about Kilcrop. It explains a little bit about his past and lets us peek into his future. I really enoyed the hell out of it. Here's a preview. On Sale January 9, 2008.

Posted by Mike Hawthorne at 9:49 AM No comments:

Things that never were part IV

Here's some more stuff from books I DID NOT draw.

I did this for my pal Dan Panosian, who then did some great finishes over it. He put my name in the hat for this thing that Marvel was doing over seas, but they passed. I really don't much more about the book then that.

A few years back I was also very briefly attached to a White Tiger pitch, but Marvel went with a different team altogether. Kinda glad I didn't get this as I was drawing WAY too stiff and just didn't kill this the way I should have.

That's all for now,

Labels: How to, layouts, pencils, Sketches

Wow, has it been almost ten days since I posted here? Sorry folks, Thanksgiving and finishing issue 7 got the best of me.

Anyway, here's some behind the scenes, sneak peek at Un-men #5.

Got a chance to spend a little time working on this cover. I want to stick with a two color palette, in this case black and orange. Far from done, of course. The text is just a holder for now, and the space up top is for the title. Just thought I'd share where I'm at so far.

Oh, and I spelled "volume" incorrectly. Sorry, it's been a long week...

Best,
Mike
Posted by Mike Hawthorne at 7:41 PM No comments:

Been hard at work on Un-men #7 as well as other side projects. During my signing tour to Philly and NY I was able to work on the Sweet Science while on the train. Here's some more works in progress. If all goes well, I may be done with this print series by Early Dec.

Also, the first chapter of Hysteria Vol. 0 has wrapped up online. Been working on a "cover" for the chapter, for something cool I have planned for the series. Here's the pencils for that.

best,
Mike
Posted by Mike Hawthorne at 8:29 AM 4 comments:

So, Newsarama has a full color preview of #4 up. Check it out -

Also, an interview I did about the Un-men back in Baltimore with Varient Edition is finally up. You can check that out here.

best,
Mike
Posted by Mike Hawthorne at 12:43 PM No comments:

I'll be in Philly tonight and tomorrow (with Un-men John Whalen), and then NY Sat. night (with John and Un-men cover artist Tomer Hanuka) Here's more info, from John's blog-

Additional dates and locations to be announced.

Mike
Posted by Mike Hawthorne at 6:11 AM 2 comments:

Still plugging away at the Sweet Science prints anytime I have a few minutes. Here's where I am now. As always, this may change a good bit. before I'm all done.

Best,
Mike
Posted by Mike Hawthorne at 7:24 AM No comments:

Things that never were part III

So, let's see more stuff from books I've never drawn shall we?

There was an instance where I almost got to do some Conan stuff, with a writer buddy of mine. Unfortunately, they wanted a DIFFERENT ( and more famous) friend of his, so it fell through. Still, would have been cool. The Dark Horse folks are great people, and I consider them friends, so maybe I could still pursue it. Again, I let it go because I just got busy.

So, repeat the above story but replace "Conan" with "Hellboy, Weird Tales". In this case, I'm kinda glad I didn't get the gig as the artist they DID get was perfect for the story and totally KILLED it.

Oh, and for a while there Bendis wanted me to draw The Pulse (when it was switching over from Alias). Marvel feft differently, and so I never got it. Again, I don't think I would have been a good fit for it anyway. I swear I have a guardian angel that kinda guides my career somehow ;)

Labels: How to, Sketches

Things that never were part II

Hey, so let's continue down memory lane a bit and look at more gigs I did NOT get.

So, I was briefly in the running for Vertigo's Crossing Midnight. In the end, they wanted a different look, which worked out because the artist on that series is fantastic!

Plus, I wouldn't have been available for the Un-men...which, let's face it, is RIGHT up my alley ;)

Here are some designs from when I was trying out for that book. 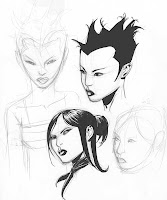 Also, I was VERY briefly in talks to do a Daredevil fill in. That got about as far as me throwing a car. Still, I did some designs trying to get the gig.

More in a couple of day!

best,
mike
Posted by Mike Hawthorne at 7:36 AM 2 comments:

Labels: How to, Sketches

Things that never were part I

I've come close to doing a lot of different books. Usually my schedule complicates things, or someone changes their mind about me working on a book later in the game. Anyway, I thought you'd all get a kick out of seeing some of the behind the scenes stuff.

Here's one that might actually happen someday, who knows. Anyway, Mike Oeming and I were going to do a big martial arts comic called Ballistic Fist. Our schedules just never seem to jibe, and we've never gotten it started.

Here's a piece I penciled and colored, with inks by Mike

Oh, and I was in talks to do a Simpson comic. Again, my schedule just didn't work out. Anyway, here's some practice runs at the Simpsons. 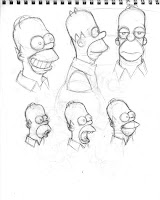 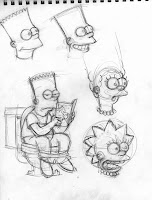 More in a day or two.

Best,
Mike
Posted by Mike Hawthorne at 7:11 AM 2 comments:

Labels: How to, Oeming, Simpsons, Sketches

Here are some of those Goon inks I promised to post before.

Next up, I'm going to post a bunch of stuff from books I ALMOST got. I think you'll dig it :)

mike
Posted by Mike Hawthorne at 7:03 AM 2 comments:

Labels: How to, inks, The Goon

So, I get a special kick out of seeing my work translated for other countries and their comic markets. I just got my copies of the French Umbra, which looks great! They did a slightly oversized version with a new cover.

Umbra recently came out in Brazil too! So, if you're in either country go get a copy ;)