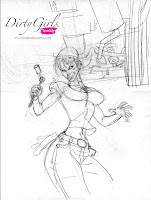 Been working on new Dirty Girl Weekly art work, finishing some off in ink and plugging away at the painted Dirty Girl. I've been having a ton of fun with this project, and I'm looking forward to making some cool stuff with the girls. I'm hoping to eventually make a Dirty Girls line of shirts, art prints, and when all is said and done a cool book featuring all the girls!

Anyway, for now enjoy them every Monday over at my site.

PS - For those interested in buying some of the Dirty Girls art, the work is now available for sale on my site.
Posted by Mike Hawthorne at 7:40 PM No comments:

Ok, so I think the big tank is pretty much a shoe in for a final design. As much as I like it with a simple black and white, I want to keep other options open in terms of color. Here are some color ideas I'm playing around with.

Here's one for the ladies, which I f-ing love to death. That chunky tank in all pink just sings to me. I'd also like to do a white shirt with a pink tank. 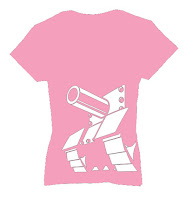 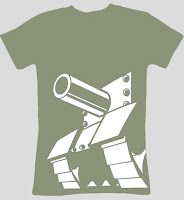 I'm not even sure I can get these exact shades, still gotta meet with a printer this coming week. 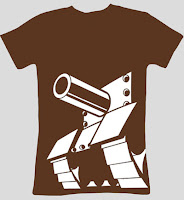 I think I gotta offer a brown one. I love brown shirts myself. Here's a lighter version. 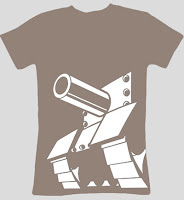 Can't forget the black on white. 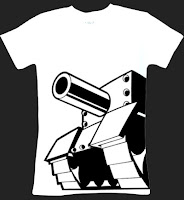 Anyway, something to think about. More soon. 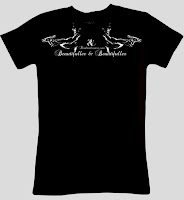 Still fighting with this, and I have several versions I'm working on.

Here are some mock ups on actual shirts. I really want to do a big graphic shirt, so I'm working on one with a large wrap around tank. It's a far cry from the first design, but I kinda' dig it. 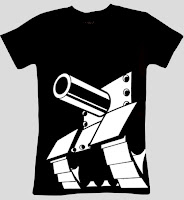 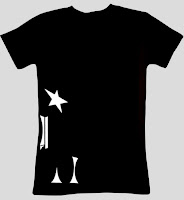 I actually like the dark grey logo better. Just have to find out from the printer if they can even do the wrap around or not. I also want to see if they can use an ink that is relatively flexible. 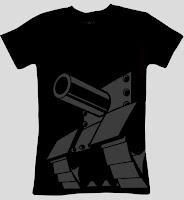 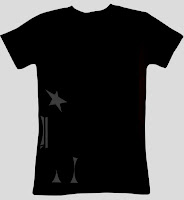 I want to have this thing be 100% on point before I offer it up, which is why you're seeing all these different versions. Hope you're all digging these behind the scenes posts.

Ok, still hammering away at this design. I want it *just* right before I'll commit to it.

I've simplified the design, but tried to keep the same feel. The text on the two color is kinda hard to read, but I love so bad...it's hard to give up. The color on the two right hand side designs is supposed to be brown, but it looks a little too mustard like in this jpeg.

Here's a one color design that my man Andy MacDonald of NYC Mech fame helped me figure out (thanks for the crit, man!). Used a different font on the text, which I like. 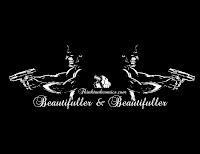 Once I settled on a final design or two I'll be taking it to a local printer and looking at some shirts, and ink colors. While all that happens, I'll have a period of time where you guys can pre-order the shirt and get a 30% discount. So, stay tuned!

Best,
Mike
Posted by Mike Hawthorne at 5:20 AM 5 comments:

I'll be making a new shirt in the next couple of weeks, and have been trying to hammer out a design. Here's one I did, but I'm not totally sold on it. I figured I'd float it out here to see what you folks think.

The "Beautifuller and Beautifuller" is a quote from Luis Armstrong, which always loved and fits how I feel about building my online comics. I want to use more ornate text, but you get the idea.

Let me know what you think. I already have some ideas of what's not working, but don't want to say them so as to see if it's just me or if anyone else sees it.

Thanks!
Mike
Posted by Mike Hawthorne at 6:43 AM 5 comments:

Here's another installment of Un-men Tuesday!

In issue nine we introduce an Un-baby, and trust me you're gonna love the little tyke!

best,
mike
Posted by Mike Hawthorne at 6:19 PM No comments:

How I layout out my comics pt. 1

I get asked about my process pretty often, mainly because I think people believe I have some trick to making a comic and keeping it on time. I don't have "tricks" so much as a work flow that changes with the need of the project.

The foundation of any page is the layout. That's where you figure out the camera angles, panel composition, and pace of the panels. It's also where you're going to make the most mistakes, and where you can cut them off before they grow on the actual page.

The size of the layouts vary for me, from half the page size to as small as 2 x 3 or so. I do them VERY quickly, either with a pencil or digitally using my Wacom tablet, after I've read the script a minimum of three times to get my head around it. I try to pick a focal scene, one that is the most important or interesting on the page. I'll then weave the other panels around it. I also try and keep in mind the amount dialogue will be on an individual panel, and plan around the balloons.

I also try and position certain elements on the page so that the eye naturally flows from one panel to the next. I'll post more about that on another day.

Best,
Mike
Posted by Mike Hawthorne at 6:26 AM 3 comments:

Labels: How to, layouts, pencils

Behind the comic making process with John Whalen

Ever been interested in the monthly comic making process? John Whalen, the writer for our monthly book at Vertigo 'the Un-men', just posted a .PDF of the script for issue seven which also links up to penciled pages of each script page. I'm not sure I've seen this done by a writer before, and it's a cool idea. Check it out here.

Best,
mike
Posted by Mike Hawthorne at 9:42 AM 2 comments:

We just wrapped up chapter two of the Hysteria web comic at www.thinktankcomics.com. If you haven't given it a read, go over and check it out. It was a very ambitious bit of business for me, way back in 1999-2000 when I wrote and drew it. I still think it stands up well today.

We'll be taking a week off to allow us to get the next chapter all lettered up and ready for you folks. So, stay tuned! 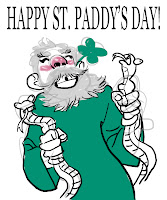 Mike
Posted by Mike Hawthorne at 8:50 AM 4 comments: 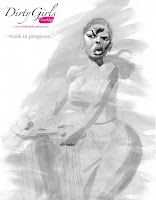 Something a little different this week. I did the pencils for this, and just felt like painting it! So, i did. It's not done just yet, but I'm excited to see where it goes.

Mike
Posted by Mike Hawthorne at 7:03 PM No comments:

Here's an all new installment of the Un-men Tuesday, a preview comic page for issue 8 (which ships tomorrow). Things heat up for Kilcrop as he continues his investigation in Abberance's red light district. Be sure to check it out! 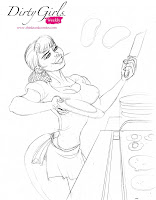 These week's dirty girl is close to my heart! A short order cook (which I used to be). Maybe if the cooks I had to work with looked like THIS girl, I'd have chosen THAT career! ;)

mike
Posted by Mike Hawthorne at 6:58 AM No comments: 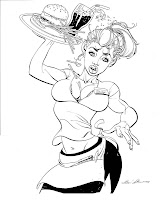 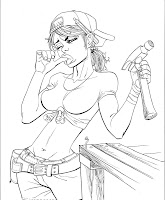 Here are some of the final inks for some of the drawings featured in the Dirty Girl's Weekly section of my site. www.thinktankcomics.com.

My hope is to eventually make an art book with all the drawings from the weekly feature, with some as art prints. For now I'll be selling the art from the site's store. It'll be up in the store later this week.

Thanks to all you folks that have been checking out the Dirty Girl's Weekly. Stay tuned every Monday for more of the lovely ladies ;)

Best,
Mike
Posted by Mike Hawthorne at 7:43 AM 2 comments:

Drink and Draw up for an Eagle Award! 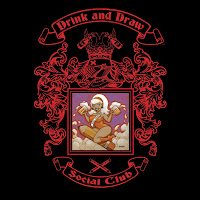 Just got the word from my man Dan Panosian that the Drink and Draw book has been nominated for an Eagle award! The book was a collection of drawings from the members of the "Drink and Draw Social Club". I got to take part in one of their get togethers when Dave Johnson was in Philly and I even got a few drawings in the Drink and Draw book put out by Image Comics. Not sure if that makes me a direct member, but those dudes are still close to my heart.

Go vote for the fellas! Scroll down to the "Comic Book related books" section.

The Drink and Draw Social Club on Myspace

More info on the Award.

London, March 2nd, 2008 –
NOMINATIONS are invited for this year's Eagle Awards; you can designate your 2007 favourites in 30 different categories at www.eagleawards.co.uk/nominate.asp.

As initiated in 2007, in order to offer a broader spectrum of the industry, voters will be asked to select from the top five nominees in each of the 30 categories. Nominations, which are once again open to the comics reading public worldwide, close at midnight on Saturday, March 22. Voting is to begin on Tuesday, April 1 with the winners announced at the Bristol International Comic Expo on Saturday, May 10, 2008. The award ceremony it the highlight of Britain's premiere comics’ event and will be held at Bristol's Ramada Plaza Hotel where the ceremony is to be hosted by British TV and sitcom personality Fraser Ayres, best known as a regular in The Smoking Room and Thieves like Us. Assisting him will be Eagle Awards regular Cassandra Conroy, daughter of awards founder, Mike Conroy.

The presentation is to be preceded by the traditional gala dinner. With demand for tickets always high, early booking is highly recommended. Reservations can be made through Martin 'Biff' Averre, who can also provide further details. He can be contacted via email at martin@acecomics.co.uk or by telephone on 01206 364140 (011-44-1206 364140 from North America).

Also, the Eagles have their very own message forum, where discussion is taking place on all aspects of the awards including suggestions for who and what might garner nominations next year. All are welcome at www.eagleawards.co.uk

Join us, and nominate now!

ABOUT THE EAGLE AWARDS – Established in 1976 by Mike Conroy, the Eagles are the comics industry’s longest established awards. Acknowledged as the pre-eminent international prizes, they have been featured on the covers of leading US and UK titles across the last three decades with such diverse titles as X-Men, Swamp Thing, Preacher, 2000 AD and MAD among those proud to display the Eagle Award emblem.


More details on the Bristol International Comic Expo can be found at www.comicexpo.net
Posted by Mike Hawthorne at 6:16 PM 2 comments:

Here's the inks from that last pencil page I posted for Un-men Tuesday last week. Great, wacky page with Cranius being Cranius.

Best,
Mike
Posted by Mike Hawthorne at 6:08 PM No comments: 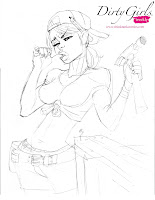 Still having fun with this monthly project, and have even started inks on some of the girls. I'll post those soon.

PS - Remember to check the girl's out every Monday.
Posted by Mike Hawthorne at 8:05 AM 4 comments: