Do YOU know what today is? Yyyyyyyyyup, it's UN-MEN TUESDAY! Again, a preview for issue 7 which is out February 20, 2008

Don't forget to pick up issue 6, which is a self contained story and a great jumping on point for new readers. Oh, and there's the trade too, if you missed the first arc. Be sure to pre-order it at your local comic shop, or at any of your favorite online stores.

Best,
Mike
Posted by Mike Hawthorne at 7:28 AM 5 comments:

Y- the last issue part I

So, many of you are big fans of Y - the last man. AND, as you know the comic is coming to an end. Newsarama is putting together a farewell to the book, and I was asked to contribute a piece for the official goodbye. I'm honored to help Newsarama.com say good by to a ground breaking comic.

I chose to focus on one of Y's coolest characters - Agent 355. Here's the tonal drawing I did to try and get my contribution figured out. I dug it, but decided to change the composition a bit for the final. I'll post it later in the week.

Labels: How to, pencils, Vertigo, Y - The Last Man

Hey, the first four weeks are down! Still having fun too.

Here's this week's Dirty Girl, a hard working construction worker. I can just imagine how that jackhammer is going to affect her...uh...disposition ;)

Check the past Dirty Girls out here, and look for a new girl every Monday.

best,
Mike
Posted by Mike Hawthorne at 6:40 PM No comments:

Which reminds me, I'll be offering the Sweet Science girls as a series of archival giclée prints in the next couple of weeks. So, keep an eye out for that! ;)

Yup, it's Un-men Tuesday! Another page from the upcoming Un-men #7, from Vertigo.

This issues starts a new arc, so be sure to ask your local shop to carry it! 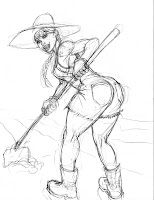 So, the Dirty Girls section of the site is up and running thanks to my web-ninja L. Jamal Walton. So, go check it out weekly and enjoy!

PS - Check out Jamal's business site.
Posted by Mike Hawthorne at 7:07 AM No comments:

Labels: Dirty Girls, girls, How to, pencils, pin up art

So, I'm going to start posting Un-men preview pages every Tuesday. They may be pencils, they may be inks, who knows. But, look here every tuesday for a little sneak and a little peek!

Still trying to get the new weekly pin up girl feature up and running on Thinktankcomics.com, but you can enjoy it here for the time being. When it's all set up, you can look forward to a new pin up girl drawing every monday. These are experiments, and once we have some I'm really into I'll be developing them into paintings and prints.

This week, we have ourselves a lovely plumber trying to get your pipes working properly. ;)

PS - Posting this a few days early, just to get a jump on this coming week.
Posted by Mike Hawthorne at 3:12 PM 2 comments:

Go check it out! I haven't seen it myself just yet.

Check out this amazing cover by Tomer Hanuka!

Mike
Posted by Mike Hawthorne at 5:34 AM 2 comments:

Just wanted to give you another sneak peek at Un-men #6, which hit's stands this coming week. It's a great jumping on point, since it's a self contained story. So, tell your friends! ;)

PS - Don't forget to pre-order the Un-men trade!
Posted by Mike Hawthorne at 7:52 PM No comments: