Greatest Zombie of all time! The Tarman!

It's ZOMBIES week over on Comic Twart, and with the Halloween season upon us I expect scary things from the crew!

I chose to draw the one Zombie that creeped me out as a kid - The Tarman, from Return of the Living Dead! 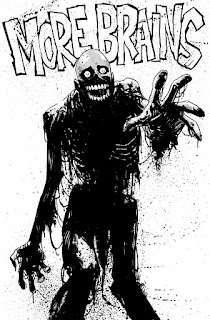 Seriously, I once gave a person nightmares just DESCRIBING Tarman to them. That creepy walk, the nasty slimy melted flesh, and that voice!

I might also draw Trash from the same movie... but worry the fellas will yell at me for drawing a nude Zombie ;-)

PS - Before anyone hammers me about Zombie lore and who they think the "greatest" is,I should add that I haven't seen very many Zombie flicks. Never seen Walking Dead, or the slew of new films that have come out. I think ROTLD was about all I could handle ;-)

So to each their own!

Cool I was just watching Return and return two last week...Tarman is the best make up ever

Seriously! That song is still in my head, like a call-to-horror war horn blast! Love it! :-)