The chill out spot 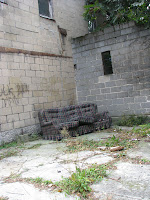 So, you may remember an early post about York city - where I currently live. My new book takes place here, and I've been roaming around my old neighborhoods taking reference pictures.

The more I work on this book, the happier I am to have set part of the book here. This City is really ugly, crazy, and full of character. It's old, in that way that all Pennsylvanian cities are, but still trying to find it's way.

While out taking pictures I found this little "chill out spot" just a few blocks from downtown. It was just this old sofa thrown in this small, bricked in enclave. You'll notice an empty beer bottle is on the sofa. I can just see someone, or some people, sitting there getting bloody and just hanging out.

I found out later that there was a shoot out in this neighborhood where a young man died earlier that same morning.

I also ran into a guy that I grew up with, and found out his brother killed him self recently.

Yeah, I don't miss much about York-- except maybe hanging at your casa, shooting the shit about comics. But the few times I ran around taking pics of the city, it was an interesting experience. It does have a lot of dirty, rundown character-- like there's a story trapped in every brick.

Chris! Man, it's my private shame that I didn't get to hang out with you more while you where here. :(