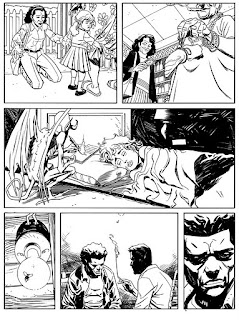 Followers of this blog may remember my posts about a secret "game changing" book I wrote and drew.

Well, it's been a while since I've spoken about it but that doesn't mean the project is dead. It's very much alive, just taking it's lumps. Which, if you know anything about me or this book, is perfectly fitting.

I won't bore anyone with all the behind the scenes mess. I will say that the book has BEEN finished for quite some time (I wrapped it up before starting Conan, and the end of Fear Agent!), and publishing-wise things seem to be coming to a head.

Stick with me a little longer. We'll get there.

Those of us who are looking forward to this (me!!) will hang in there when it comes out. Things happen. Life happens. As long as you still feel the enthusiasm when it does get published, then they'll all be dying to check it out.

This book is so important to me, I can't see losing any interest in it :-)

Thanks, pal. I appreciate the support.