Why I don't (normally) sell art. 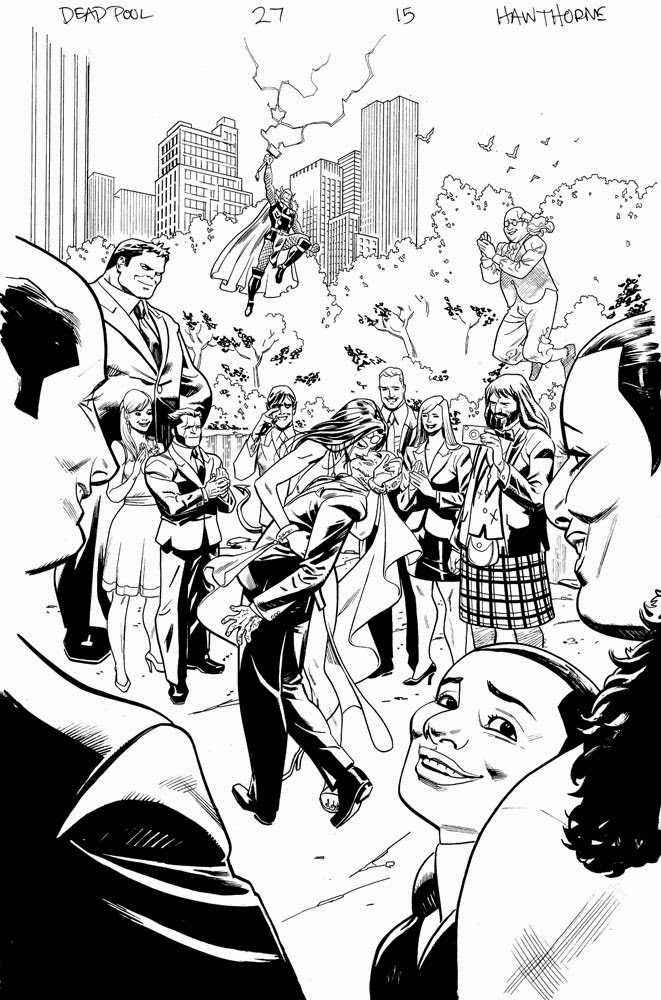 Besides "Why don't you go to conventions?", the second most asked question I get is "Why don't you sell art?". I'm always flattered that anyone wants to buy my work, and appreciate it more than I can say in words, but more often than not I'm just not ready to let the work go.

Now, I should say that I have sold some art before. Just here and there, mostly around the time I was on Comic Twart. I like seeing the art go to good homes, but I almost always regretted letting them go at all. The reason is simple: I don't know what the hell I'm doing.

I'm pretty good at making a comic, but I'm no genius. I can't absorb work the way some artists seem to be able to. I have to live with it a bit, soak it in. Thing is, working in comics is grueling. I imagine it's like being a stand up comic. You tell a good joke, awesome. Now, tell another. Now another. Now ANOTHER. No more jokes? F&*k you, get off the stage!

That's how I have to draw day to day. I remember, before I could get work, the thrill of finishing a new page. I was sure that page would be THE ONE to get my foot in some imaginary door at some publisher. I'd enjoy the page, study it, tell myself how awesome and clever I was for drawing it. Thing was, I was stupid then. I didn't know I was stupid, which is magic. I wish I could be stupid like that again. ... but I digress.

As you get better you start to see the misses, the goofs. You see the dumb, avoidable mistakes in the art that you SHOULD have seen while making it. Problem was that once I started to get work I was moving fast all the time so I wasn't seeing the mistakes in the art, I was seeing them in the finished books. That kills you. Well, it kills me anyway. But even then I'm not really seeing the mistakes. I'm seeing the shrunk down, colored, printed, lettered versions of my bullshit. To really learn I need to see the pages.


All I really want out of life is to tell a story with pictures better than every person who ever drew from now till the end of time (That, and to play the harmonica. Maybe speak French better... but that's it). Thing is, for me to get better I need time to see where I went wrong. So, I keep my pages. This way I can study them later. See where I went wrong, show them to smart people who can show me the stuff I missed.

This is why I don't sell pages very often. It's not you, it's me. I have the problem. I just want to draw really, really well. To do that I have to have the pages to go back to.

That's not to say I'll NEVER sell pages. In fact, I will. Some day.... when I can finally draw well or when the need for dough trumps my desire to draw better. Which ever comes first.

PS - I actually did sell the page above. "Hypocrisy" you say? No, no, It was for a charity thing.

The part of me that would be bummed that you're not selling artwork is vastly trumped by the facts that 1) you're doing well enough that you don't see a need to sell the art, and 2) that you're that dedicated to improving your artwork, which is already (to me) really daggum good.

Keep on keepin' on, dude.

Thanks, man. I have to compete with a lot of monsters out there, so there is always room for improvement.

Makes perfect sense to me. I know that with my writing, I need to go back and read some of my stuff some days just to actually prove that I really did it and thus I can probably do it again. The difference of course, being that I can read a copy. Your commitment to your art does you credit.

”All I really want out of life is to tell a story with pictures better than every person who ever drew from now till the end of time.”

Charles - Thanks for understanding, and for the kind words!