A few months back I got to meet this courageous little boy "Iron Max" and his sister Zoe. Max has overcome some hard times with his hemophilia, but he's got a will of iron! He and his sister put together a great little calendar to raise money and awareness for the disease. We met a few months back while at the Marvel offices in New York. I got draw these two as their favorite heroes. Seriously awesome kids!
Here's a pic of us that apparently appeared on NBC news. 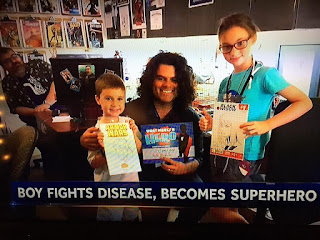 PS - Thanks for the pic, Fiel Patricio